The prophet cries out against God, accusing God of having duped him, called him to his ministry on false premises. He was sent out to declare the word of the LORD, but no one has listened. Indeed, he is met with scorn and derision. In an era of prosperity, all he sees is the bitterness of God’s pending judgment. The sins of the nation are ever before him, its folly abundantly clear – they are on a path to destruction while the leadership of the nation imagines only glory.

The prophet’s preaching has achieved nothing. But every attempt to hold his peace ends with a burning passion:

If I say, “I will not mention him,
or speak any more in his name,”
then within me there is something like a burning fire
shut up in my bones;
I am weary with holding it in,
and I cannot.

The word demands to be spoken.

Jesus doesn’t hide anything from his followers. He tells them that their message will face opposition. “If they have called the master of the house Beelzebul, how much more will they malign those of his household!” It’s not really the best strategy for recruiting followers. We rather prefer the message of the American prosperity Gospel: God wants you to be successful and wealthy. But the healing and redeeming work of Jesus leaves scars on his hands. And we are sent to carry on that work.

We are sent, as we heard last week, to “proclaim the good news, ‘The kingdom of heaven has come near.’” We are sent to “cure the sick, raise the dead, cleanse the lepers, cast out demons.” We have “received without payment” and we are to “give without payment.” We are to dispense the gifts of God, to scatter abroad the benefactions of the new governance dawning among us. The reign of heaven, the dominion of God, the rule of the Spirit, the new creation – this is the gift we carry to the world.

But the world rather likes its bloodletting and grasping, and not everyone will rejoice at the dawning of grace and faithfulness.

So we are sheep amidst wolves. We are bearers of the cross. The message will heal and it will anger. It will unite and also divide. There will be hostility, mockery, even violence. But the God who is mindful of even the sparrows is mindful of every hair on our heads. And “Everyone therefore who acknowledges me before others, I also will acknowledge before my Father in heaven.”

The fields are ripe for the harvest. The world is ready for grace to reign.

Gracious God, Your word divides as well as heals;
it closes ears as well as opens hearts.
Grant us courage to be faithful in our witness
and diligent in our service
that, with boldness and joy in your promise,
your grace and mercy may be revealed to all people;
through your Son, Jesus Christ our Lord.

First Reading: Jeremiah 20:7-13
“O Lord, you have enticed me, and I was enticed.” – The prophet raises a lament towards God for assigning him a message of judgment and destruction that has resulted in nothing but hostility and persecution. And when he tries to be silent, God’s message burns like a fire within him.

Psalmody: Psalm 69:7-10, 16-18
“Zeal for your house that has consumed me; the insults of those who insult you have fallen on me.” – The poet cries out to God in the midst of persecution and trouble.

Second Reading: Romans 6:1b-11
“Should we continue in sin in order that grace may abound? By no means!” – In the course of setting forth his message that all are justified (in a right relationship with God) by grace (God’s merciful action) through faith (trusting God’s promise), Paul anticipates the objections of his opponents that if our sin shows how great is God’s mercy, why not continue to sin? Such a notion is rejected because joined with Christ in baptism we have entered into a new reality. We have come under Christ’s dominion, being transferred from the realm of sin and death and living now in the realm of grace and life.

Gospel: Matthew 10:24-39
“Do not think that I have come to bring peace to the earth; I have not come to bring peace, but a sword.” – the path of discipleship is not an easy one. The world will resist God’s claim on life, but the followers of Jesus are sent as agents of God’s transforming justice and mercy. 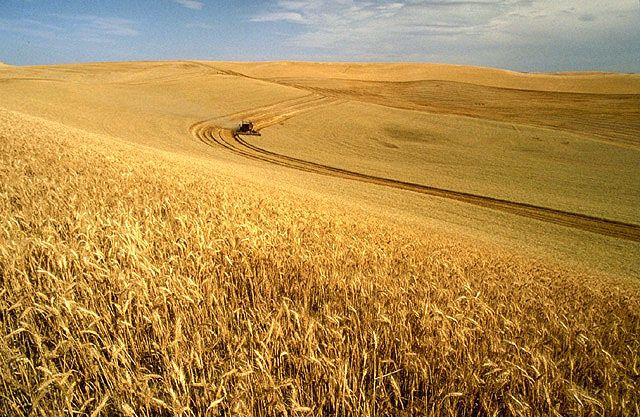 1May God be gracious to us and bless us
and make his face to shine upon us,
2that your way may be known upon earth,
your saving power among all nations.

And when we are generous, we want God to bless every table – though the truth is we are more concerned with our own than those neighbors far away.

We think blessing is an end in itself, that it is good to be blessed, that it is good to have safety and security and abundance. We have a much harder time thinking of blessing as a means to an end. God intends to accomplish something through it. God is not just giving us an overflowing pantry. God is giving such a pantry that others might know God’s grace and power.

And it’s not this strange American perversion: “Look at me. I’m rich because of God. You can be rich, too.”   It’s rather, “Look at the abundance of God that there is plenty to share.”

So the psalm is a harvest song, calling upon all creation to recognize God’s goodness, God’s abundant generosity. The harvest is meant to bring joy to all – and give rise to praise from all. God’s blessing has a purpose: “that your way [God’s generosity and goodness and care for all] may be known upon earth, your saving power among all nations.”