The Third Sunday of Easter

“Children, you have no fish, have you?” It is a haunting question. A night of labor has resulted in nothing. And this strange figure on the shore in the dim light of dawn knows it.

The writer of this Gospel doesn’t tell the story of Jesus encountering Peter by the sea at the beginning of his ministry where they leave their boats and embark on a new life as those who work to gather the human community into the nets of God’s mercy. And we do not know whether our Gospel writer has transformed that story into a resurrection appearance or the risen Jesus came to meet Peter once again at the sea, repeating the summons that first changed Peter’s life – though there is a great spiritual truth in the latter.

There is a profound element of new beginnings in this narrative. Three times Peter had denied Jesus. Now he is presented with the opportunity to give a new answer to the threefold question whether he belongs to Jesus.

The texts this Sunday are rife with new beginnings. Saul is given a new beginning in his encounter with the risen Jesus. He has tried to purge Israel from this dangerous heresy that Jesus was raised and here he is with eyes opened and a new beginning to his life. The psalmist sings of a new beginning, having been delivered from a deadly disease. And the hosts of heaven singing the praise of the lamb who was slain yet lives anticipates the rebirth of the world.

It is a theme deep in the biblical narrative as a whole – when hope is lost, new life is given. God calls the world into being from its primal chaos, rescues it in the days of Noah when there is nothing but violence, gives to Abraham a promise of land and descendants when he and Sarah are homeless and barren, calls Moses to lead Israel out from bondage when the imperial power has turned against them – and when they are trapped by the sea, God opens a way, swallowing up the might of Egypt behind them. From death into life, from judgment into grace, from sorrow into joy, God gives a new beginning to us and to all creation.

When the story seems over, there is Jesus on the shore summoning us to cast wide the net of mercy, dine at his table, and tend the flock of all God’s children.

Gracious God,
through the resurrection of Jesus
you have turned all human mourning into dancing.
As he appeared to his followers by the seashore,
nourished them at his table,
and sent them out into the world,
so come to us that, fed by your mercy,
we too may carry your bread of life to the world.

First Reading: Acts 9:1-20 (appointed: 1-6 [7-20])
“Now as he was going along and approaching Damascus, suddenly a light from heaven flashed around him. He fell to the ground and heard a voice saying to him, “Saul, Saul, why do you persecute me?” – Saul (Paul) is blinded when the risen Christ encounters him on the road to Damascus and Ananias, responding to God’s call, goes to heal him.

Psalmody: Psalm 30
“Weeping may linger for the night, but joy comes with the morning.” – With words that echo the resurrection, the poet sings of God’s deliverance from an unexpected affliction.

Second Reading: Revelation 5:11-14
“Worthy is the Lamb that was slaughtered to receive power and wealth and wisdom and might and honor and glory and blessing!” – The prophet sees the heavenly hosts around the throne of God singing praise to the Lamb who stands upon the throne.

Gospel: John 21:1-19
“When they had finished breakfast, Jesus said to Simon Peter, “Simon son of John, do you love me more than these?” – In an addendum to John’s Gospel, The risen Jesus appears to his followers at the sea of Galilee and gives Peter the opportunity to turn his threefold denial into a threefold affirmation of allegiance to Jesus, conveying to him the leadership of the nascent Christian community. 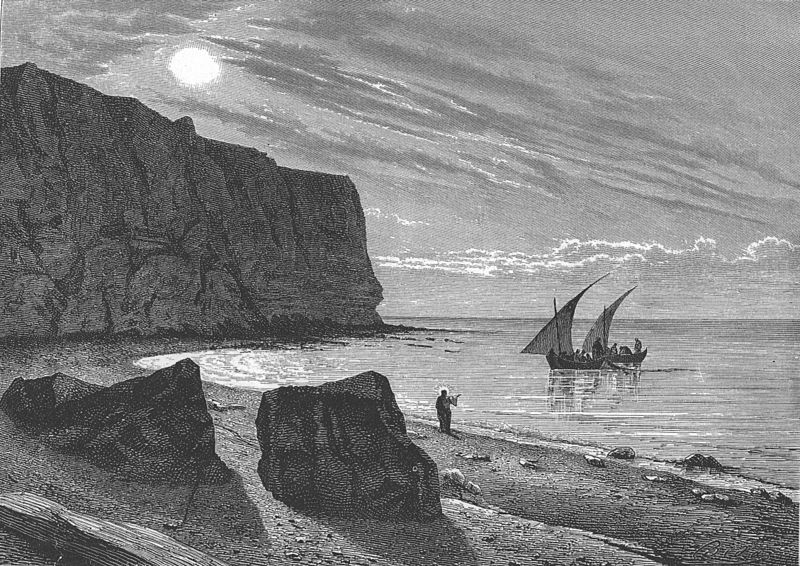 15For we do not have a high priest who is unable to sympathize with our weaknesses, but we have one who in every respect has been tested as we are, yet without sin.

We hear the word ‘sympathize’ and we think about a set of emotions, a process of identifying with the feelings of another. And the word ‘weaknesses’ makes us think of whatever weakness of character yields to temptation. It is weakness that keeps me eating potato chips when I know I should stop.

But the weakness that the author has in mind is not a psychological one; it is our human frailty, our mortality, our membership in a world that knows sickness and death, war and violence, slavery and subjection, hunger and greed. Jesus doesn’t “sympathize” with our human condition; he has tasted it fully. He as shared it. He has suffered it with us. (‘syn’ = ‘with’; ‘pathos’ = ‘suffering’, ‘misfortune’) He has borne the heat of the day, the aches of the body, the pain of loss. He has known hunger and fear and sorrow. He has shared our suffering and dying.

Jesus has shared our human condition – “yet without sin.” Meaning that in all the trials and struggles, pleasures and sorrows of life he did not break faith with God. His allegiance did not waver. He trusted perfectly. He walked the path completely.

There is nothing we experience as mortal creatures in a broken world that Jesus does not understand, that he did not share. He knows our stresses and fears and pleasures.

Jesus understands all those tests. And he deals gently with us. So we come to the throne of grace boldly. When Jesus meets Peter at the seashore after the resurrection and asks him three times “Simon, son of John, do you love me?”, he is not twisting the knife. Gently he gives Peter the chance to rewrite the story of a three-fold denial with a threefold declaration of allegiance.

Jesus understands. But he does not leave us there. Like Peter he leads us back to the path of faithfulness to God and fidelity to our fellow travelers on this earth, our fellow children of a gracious but determined God.