42A poor widow came and put in two small copper coins, which are worth a penny.

The children’s sermon was a simple idea. I used a Harry Potter pillowcase as a trick or treat bag. Unfortunately, none of these kids were into Harry Potter, but the sound of some candy in the bottom of the bag did lead them to guess what it was. So I held out my bag to each of them and said “trick or treat!” The confused looks on their faces were choice.

When it was apparent they had no candy to give, I reached into my bag and gave them each some. Then I looked them each in the eye and said again “Trick or treat!” I confess I was surprised that they each gave their candy back.

Then I asked my simple question: “Which is more like God, the one who gives or the one who takes?”

That answer they knew.

At the end, I gave them each a piece of candy again (some little package of a fruit rollup type thing the youth director had graciously provided), and then came the most delightful moment of the morning: The kids went running back down the aisle rejoicing, “We got candy!!”

The first question is important for the adults, too: “Which is more like God?” But there is a related question for us: “Which should be more like God’s people?”

Christian life is not about following a set of rules; it is about embodying the character of God. It is living the values of the kingdom. It is about living the giving.

The preaching today (both the “children’s” message and the “adult” sermon) was rooted in Jesus’ warning about the scribes and his remark about the widow giving her last two pennies. I’ve posted the text of the sermon here, but here are some highlights.

The question in the children’s message was simple: “Is God more like the giver or the taker?” Learning to truly inhabit the realm of God’s giving is the challenge.

Elijah and the Widow of Zarephath

10When he came to the gate of the town, a widow was there gathering sticks; he called to her and said, “Bring me a little water in a vessel, so that I may drink.”

It seems like such a simple little request. But it is during a three-year drought. Water itself is scarce. Who knows whether Zarephath still had easy access to fresh water? Dry sticks, on the other hand, are sure to be available.

The prophet is in foreign territory. The widow refers to the LORD as “your god.” Her god – or, at least, the god of her people – is the god Ba’al. The worship of Ba’al is the source of all this trouble. He is the Canaanite storm god. The bringing of the winter rains. The source of water for the community and for the fields. The source of prosperity and abundance. Israel has adopted the worship of Ba’al. They have become part of the modern world. Tyre and Sidon are great cosmopolitan cities. They are the home not just of foreign trade and the rich abundance of this world’s goods; they are the home of art and culture. It is from Tyre that Solomon hires workmen to build him a temple – though Solomon at lead dedicated his temple to the LORD.

The king of Israel has married the daughter of the King of Sidon. She has come and brought modern sensibility to this backward nation in the hill country. They have built a temple to Ba’al and she has brought with her 450 prophets of Ba’al (and 400 prophets of the goddess Asherah).

She has also tried to stamp out the backward religion of this God of the desert who commands justice for all.

Jezebel is the one who schooled king Ahab in the use of ruthless power, taking Naboth’s vineyard – land God gave to Naboth’s family that now belongs to the king even as Naboth now lies in the grave.

So here is the prophet in the homeland of the queen. And he has asked for a drink. The widow shows hospitality to this stranger and goes to get him some water.

And then he asks for a bit of bread.

A bit is all she has. Her last handful of meal. Enough for one last small cake to enjoy with her son, and then nothing awaits her but death. It is why she is gathering sticks. Fuel for the fire to bake the one last small bit of bread.

The woman is faced with a challenge. Hospitality is the supreme value of the age. To feed the hungry is not only noble, but the one true thing. But this is her last bread. This her final meal.

She protests. She explains to this foreign prophet what she intends to do. “That’s fine,” he replies. “But first make some for me.”

First do the right thing.

And to this he adds an incredible promise: the jar of meal will not fail until the drought is over.

She is a hero of the faith. She dares to trust the promise of a foreign prophet and his strange desert God. She dares to do the right thing though it costs her everything. And she is sustained. She and her son and the prophet live from that small bit of never failing daily bread.  The gods of prosperity have failed her; the LORD, the God of justice and mercy has not.

It is a story like the manna in the wilderness: enough for today, trusting God for tomorrow.  It may seem like a hard way to live. But it is actually quite liberating. Let God worry about tomorrow. Let us be free to do the right thing today.

Watching for the Morning of November 8, 2015 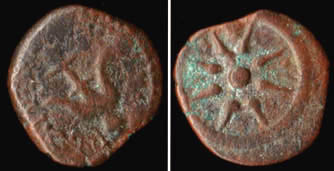 Sunday returns us to “ordinary time” (the numbered Sundays of the year) after the festivals of the last two Sundays. Jesus is now in Jerusalem. Our narrative has jumped over the entry to Jerusalem (which we read on Palm Sunday) and the cleansing of the temple (which we read in Lent from the Gospel of John). We have skipped Mark’s description of the heightening conflict with the Jerusalem elite and Jesus’ stories of God’s pending judgment on the city. What remains before the account of the passion is this Sunday’s text and Jesus’ teaching about the fall of Jerusalem and the end of the age.

The church calendar is shaped by the northern hemisphere. This is the season of harvest, or reaping and winnowing. And the texts and tone of worship at the end of the church year turns towards the notion of the final harvest, even as the Gospel narrative itself reflects the growing crisis between Jesus and the authorities.

So this Sunday Jesus warns his followers about the scribes who love the seats of honor and the show of pious prayer, but “devour widows’ houses.” Although the words are directed to his followers, we should not imagine that this is a private conversation. It is a challenge of the Jerusalem elite for all to hear. And no sooner are these words out of Jesus’ mouth then he is able to point to a widow giving her last pennies into the temple treasury. Here is concrete evidence that instead of doing justice and mercy, the temple system bleeds the poor.

No wonder they want to kill him.

We have been taught to hear Jesus as if he were praising the woman for her dedication, but the context shows that his words are a lament. He wants his disciples to see that this is a murderous system. And the haunting realization for the hearers of Mark’s Gospel is that the murderous system is about to turn on Jesus. Jesus is about to give his last two farthings, his last full measure of devotion. The priests and scholars of the privileged elite in Jerusalem will devour Jesus to maintain the temple – but it is the temple that will be destroyed and Jesus who will be raised. God will cast down the mighty and raise up the poor. Mary will find the tomb empty and Jesus the crucified will meet them in Galilee. God’s kingdom, God’s reign, is dawning and earthly kingdoms are falling.

So Sunday we will hear of Elijah and the widow of Zarephath. When drought afflicts the nation that has turned away from the God of justice and mercy to the gods of prosperity, from the LORD of the Exodus and Sinai to the Ba’al of the storm, God provides for the prophet and a poor widow and her child with a never-failing source of life.

Sunday’s psalm will bear witness to this God of justice and mercy, declaring that he “executes justice for the oppressed,” “gives food to the hungry,” and “sets the prisoners free.”

And the author of Hebrews will continues his argument for the uniqueness and superiority of Christ over every human priest, declaring that Christ has not gone into an earthly temple to make the annual atonement for the people with the blood of goats and bulls, but he has ascended into the heavens and stands before the throne of God to intercede on our behalf. The God of justice and mercy. The God who does not devour widows, but gives life.

Guardian of the weak, protector of the powerless, Lord of all:
send forth your Holy Spirit
that your people may not seek the places of honor,
but stand with Jesus alongside the broken and poor.
May we be among those whose lives are given wholly to your service;
through your Son, Jesus Christ our Lord.

First Reading: 1 Kings 17:8-16
“The word of the Lord came to Elijah, saying, ‘Go now to Zarephath, which belongs to Sidon, and live there; for I have commanded a widow there to feed you.’” – As the drought grows ever more severe after God has declared no rain will fall on the kingdom of Israel when it has turned to worship the rain god Ba’al, God provides for Elijah through the faithfulness of a widow already at the edge of starvation.

Psalmody: Psalm 146
“Happy are those whose help is the God of Jacob, whose hope is in the Lord their God…who executes justice for the oppressed; who gives food to the hungry.” – The psalmist sings of the character of God (in contrast to human princes).

Second Reading: Hebrews 9:24-28
“Christ did not enter a sanctuary made by human hands, a mere copy of the true one, but he entered into heaven itself, now to appear in the presence of God on our behalf.” – Arguing for the superiority of Christ, our true high priest, over earthly priests, the author declares that Christ Jesus has not entered an earthly temple to intercede for us, but stands before the throne of God in the heavens.

Gospel: Mark 12:38-44
“A poor widow came and put in two small copper coins, which are worth a penny.” – Jesus warns his followers about the way of the scribes who “devour widows’ houses” and then witnesses a widow placing her last two halfpence into the temple offering.