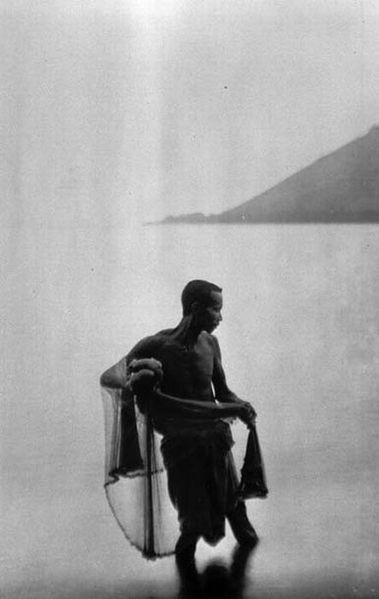 The Third Sunday after Epiphany:

John is arrested.  When Jesus hears, he moves from Nazareth to Capernaum.  His move ties him yet again to the prophetic word. “In the former times,” reads the text from Isaiah,

“the Lord brought into contempt the land of Zebulun and the land of Naphtali, but in the latter time he will make glorious the way of the sea, the land beyond the Jordan, Galilee of the nations.”

Nazareth is in Zebulun; Capernaum in Naphtali.  These are the tribal regions that, in the time of Isaiah, first felt the tramping boots of the Assyrian army and were led away into exile beneath the smoke from the fires of war. “The people who walked in darkness have seen a great light,” writes the prophet.

Then, walking along the shore, he summons four fishermen to come with him.

Demonstrations arise easily in that culture, and a complaint is strengthened by a crowd.  But Jesus isn’t on the march to redress some wrong.  Jesus is on the march to change the world.  Peter and Andrew, James and John, will still be fishermen, only now they are not hauling in nets of the captured, they are setting the world free: “Jesus went throughout Galilee, teaching in their synagogues and proclaiming the good news of the kingdom and curing every disease and every sickness among the people.”

Sunday we hear the familiar call story at the beginning of Jesus’ public ministry.  But the story begins in Isaiah with the prophetic declaration “The people who walked in darkness have seen a great light.”  This is the season of light, of Christ made manifest to the nations.  The star and the magi linger.  So we will hear the prophet, and with the psalmist we will sing: “The Lord is my light and my salvation,” and Jesus will meet us at our nets and issue his summons to follow as God sets right the world.

And alongside this dawning light, alongside this call to join the movement, Paul will warn us about divisions and point us to the proclamation of the cross – a message that may look like foolishness but is “the power of God,” the healing of the world.

Gracious God,
you call us to follow your Son Jesus in lives of witness and love.
Form our hearts and minds by your Holy Spirit
that we may ever rejoice in the freedom of your grace
and be faithful in our calling as your voice and hands in the world.

First Reading: Isaiah 9:1-4
“The people who walked in darkness have seen a great light.” – In the aftermath of war, the prophet speaks to announce the dawning of a new day when “the rod of their oppressor” has been broken.

Second Reading: 1 Corinthians 1:10-18
“Now I appeal to you, brothers and sisters, by the name of our Lord Jesus Christ, that all of you be in agreement and that there be no divisions among you, but that you be united in the same mind and the same purpose.” – Paul takes up the problem of a community divided into parties defined by various teachers, centering them instead in the message of the cross.

Gospel: Matthew 4:12-23
“Follow me, and I will make you fish for people.” – Matthew describes the beginning of Jesus’ ministry in Capernaum as a fulfillment of the Isaiah text for Sunday, then relates the summoning of Andrew, Peter, James and John.